CONTI SYNCHROCHAIN® CARBON - PU heavy-duty timing belt with carbon tension member for extreme, ultra high-power applications. An optimum combination of materials and processing advantages are why polyurethane heavy-duty timing belts clearly outscore conventional rubber timing belts. They do so in terms of tensile strength and abrasion resistance as well as with respect to resistance to hydrolysis. Advantages like this can really make a difference, particularly in industrial applications at temperatures below 80°C.

Thanks to their special design and specific materials, they ensure reliable power transmission at both high torques and high dynamic loads. They facilitate reverse flexing in the multi-disc drive and are thus the optimum alternative to chain drive systems.

This makes them the best choice for original equipment as well as an optimum aftermarket alternative when replacing existing drives.

Maximum performance yet reduced width overall: that is what the CONTI® SYNCHROCHAIN CARBON has to offer. Its core element is a newly developed carbon tension member. While maintaining the same width overall, it can transmit up to five times more power than conventional timing belts.

This means that a much narrower belt can be used for the same output. And so, with the CONTI® SYNCHROCHAIN CARBON it is thus possible to cut the space needed by up to 80% in comparison with conventional timing belts.CONTI SYNCHROCHAIN® CARBON 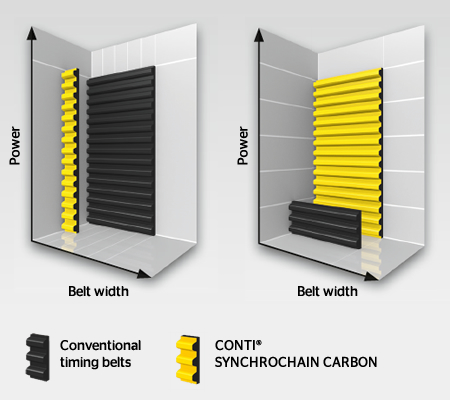 Light but durable polyurethane for teeth and belt backing, plus a specially coated, wear-resistant fabric: The defining feature of SYNCHROCHAIN heavy-duty timing beltsis an intelligent design that combines ultra-high-quality materials.

The CONTI® SYNCHROCHAIN CARBON provides up to 30% higher output than its predecessor. It thus offers designers and users entirely new opportunities.

Its strength comes into play everywhere in machine and plant engineering. This applies both when it is used as original equipment and as a replacement part.