You can change your settings at any time via the "Cookies" link in the footer of the website.

Higher efficiency, energy savings, increased power transmission, longer service life and reduced maintenance costs can be achieved by belt drive optimization. Change of the belt drive can save up to 15% energy. 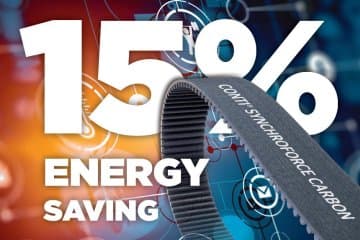 Efficiency describes the ratio of output power to input power. V-belts suffer from belt and pulley friction, bending, elongation and decreased pretension, resulting in loss of efficiency. V-belts achieve an average efficiency of about 92% due to slippage. The installation efficiency is about 97%. However, in operation, the efficiency of conventional V-belts decreases continuously. Poor and irregularly maintained V-belts work far below 90%.

In contrast, timing belts have substantial advantages. Their consistently constant engagement in teeth allows synchronous movement and prevents slippage. Frictional losses at the tooth sides are small and the elongation losses are also significantly lower than in V-belts. Timing belts are able to operate with an efficiency of 98% to 99%.

In practice, this was equivalent to an energy saving of € 2,390 per year.

Belt drives are one of the main areas where higher energy efficiency of machines can be achieved. Research shows that, notwithstanding maintenance, timing belts have an average efficiency up to 6% higher than V-belts.

V-belt efficiency is significantly reduced due to insufficient pretension.

Regarding V-belts, there is a big difference whether the belt is new, used or worn. Conventional V-belts elongate and lose preload during operation. If the preload is insufficient, the V-belt efficiency decreases by 10 to 15%. Poor and irregularly maintained V-belts work far below 90%. Timing belts are able to work with practically the same efficiency throughout the operation period. Optimizing or changing the drive allows considerable energy savings.

Change from classic V-belts to narrow V-belts for highest performance and speed according to DIN 7753.


Free shipping when ordering
to a Czech address for more than 80 €.


Go to Our Eshop